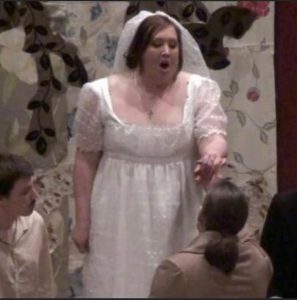 Regularly appearing on TV and radio, AmyBeth performs internationally as a Soprano both as a Soloist, Musical Director and as part of acclaimed classical ensembles Cantate Gaudio and Vocal Duo ‘Diadem’.

She has sung with classical vocalists Jose Carreras, Lesley Garrett, Emma Kirkby, David Kirby-Ashmore and Lisa Milne, as a backing vocalist with Multi award winning Jazz artist Lianne Carroll and has arranged additional vocals for popular recording artists (Abbey Road Studios).
She made her West End Debut in 2015 at the Young Vic starring as principal singer for the critically acclaimed play ‘The Event’.

Many of AmyBeth’s past and current students work in the West End, nationwide tours, cruise ships and even Broadway.

AmyBeth is currently also the Course Coordinator at the Academy of Music and Sound in Edinburgh where she coaches Vocals, Performance and Theory up to Masters level.

AmyBeth has an enthusiastic, inclusive and bespoke approach to teaching focussing on confidence building, technique and adapting to the students needs.